David Douek, President of Douek Apartments, was featured in the 2022 Rentals.ca Canadian Market Report. Read his thoughts on the future of Montreal's multi-residential rental market below. 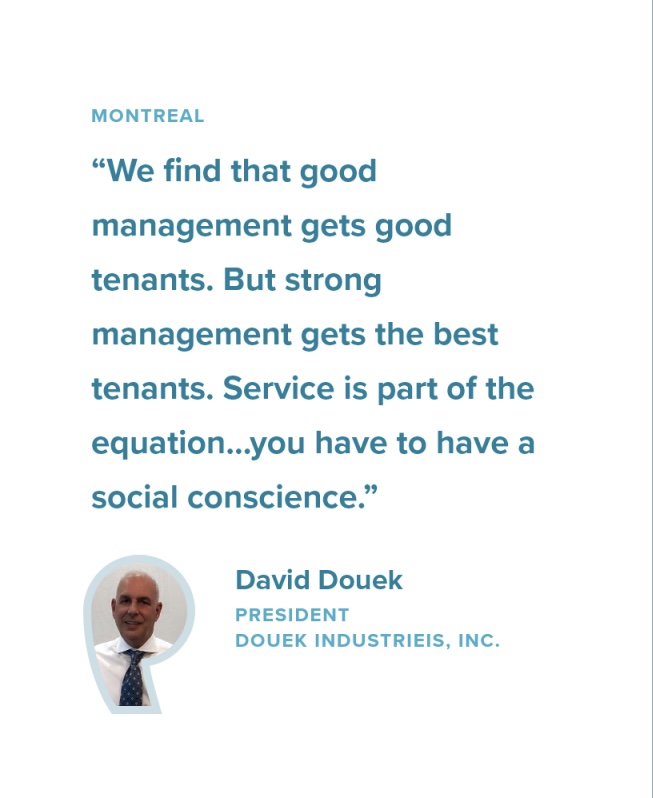 David Douek, president of Douek Apartments, believes rents in Montreal will not decrease because costs for renovating, maintaining, insuring and even heating buildings “are way up.”

And, dropping rents, he says, drops the value of buildings.

He believes landlords and property managers will continue to offer incentives to entice the best renters until the COVID-19 pandemic is over, and the borders are open with immigrants and international students flowing freely again in Montreal.

He says incentives such as one- or two-months free rent are still offered in Downtown Montreal, carried over from the worst of the pandemic in 2020 and early 2021 when

the city centre was more like a ghost town without office workers, students, shoppers and other visitors.

Douek says prospective tenants continue to ask landlords: “What’s your promotion? They are accustomed to it now.”

Rental markets around universities are tight with more students looking for places to rent than are available. He says in the east end of the city where rents are lower and the market is tight, units are rented quickly.

But not so much for the higher end (for example a two-bedroom for $1,800-plus), where there is a good supply of apartments.

Examples of the higher-end rental markets in Montreal include areas east of Mt. Royal and close to Le Plateau-Mont-Royal where tech companies are, he says. Most residents in these areas want to be close to Park Mount-Royal, all the services and restaurants, and they want to live in smaller buildings, not high-rises.

Douek also says many of the younger tech workers don’t have cars, so they want to live near transportation centres. While they don’t necessarily want to live downtown, they also don’t want to have to walk more than 10 minutes to their homes. So, rentals farther away from metro stations don’t rent as fast as those closer to the stations.

While the CMHC pegged the Montreal CMA vacancy rate at 3 per cent Feb. 18, neighbourhood vacancies vary depending on the location.

But Douek has “full confidence” vacancy rates will decline in Montreal once the border is completely open and COVID-19 is gone, “then there will be a lot of pressure on the rental market.

“All these units will fill up,” he says, “There will be a shortage afterward.”

With the cost of construction rising rapidly since the pandemic, it is challenging and unprofitable to build purpose-built rentals to meet the future demand. Therefore, with no new supply this will put a lot of pressure on the vacancy rate and the rental prices.

Douek is seeing more demand for larger units because of the work-from-home phenomenon, and with the costs of rentals rising so rapidly in some area, “we see a lot of roommates.”

He says tenants living in “small, 390-square-foot apartments downtown” wanted the amenities such as swimming pools, gyms, TV rooms and community rooms, but now are saying they are “claustrophobic.”

“They are happy to move to older apartments where they have more space with maybe a renovated kitchen, but no pool or gym,” he says.

He says affluent families who want plenty of space can find homes in the right areas such as the anglophone enclave of Westmount, where rents are $5,000 to $6,000.

He says the suburb is safe with great schools, and a number of parks, gardens, small restaurants and coffee shops. The REM will also connect Montreal’s suburbs to the downtown core. This will play an important role in the growth of the suburbs for the rental market. For example, those who live in the West Island will be able to reach downtown (McGill University) within 20 minutes by light-rail train.

He says he has seen a good number of “out-of-towners” moving to Montreal for the work/lifestyle/culture of the city. Many are willing to pay higher rent even as Montreal rents rise because they are accustomed to even higher rents.

“Rents are increasing here,” Douek says, “But they are still lower than Toronto and Vancouver.”

One of the incentives Douek says he offers some of those moving from other cities is furnished units.

“They come here to work in tech, and don’t want the hassle of moving furniture or selling it when they leave,” he says. “We work to make the places fit their style, provide nice computer desks and furniture that’s well thought out.”

Douek tries to bridge the chasm between landlords and tenants with customer service.

He refers to tenants as clients and says quick resolution to problems is the best way to maintain good relationships. He promises a 24-hour response to an email complaint and an immediate response to an emergency text.

“We find that good management gets good tenants,” he says, “But strong management gets the best tenants. Service is part of the equation…you have to have a social conscience.”